I love good organization in my life.  It makes me feel calm, peaceful, and like I have it all together (which I most certainly do not!)  Since I moved back in with my parents, which is creeping up on two years now, the little bit of organization I had implemented was pretty haphazard and lacking in both functionality and practicality.

So ironically, organization has been cluttering my mind and pinterest boards lately with some great ideas.  It got to the point where I desperately needed to stop obsessing about it and just DO SOMETHING.

My first project I decided to take on was Molly's toys.  It is crazy how insanely fast one little child can accumulate toys.  Big toys, tiny toys, noisy toys, and toys with a million parts.  I had been reading a lot about the concept of toy rotation thought I would give it a try.  The idea is that you go through all of your child's toys, decide what to keep and what to donate, then separate the toys to keep into separate bins.  Then only one bin is brought out at a time and will stay out for a day, week, month, or whatever works for your family.  Then at the end of the given time period, the toys are put back into the bin and a new bin is brought out and the "new" toys seem so much more exciting.

So while Austin took Molly to the Aquarium yesterday, I tackled this: 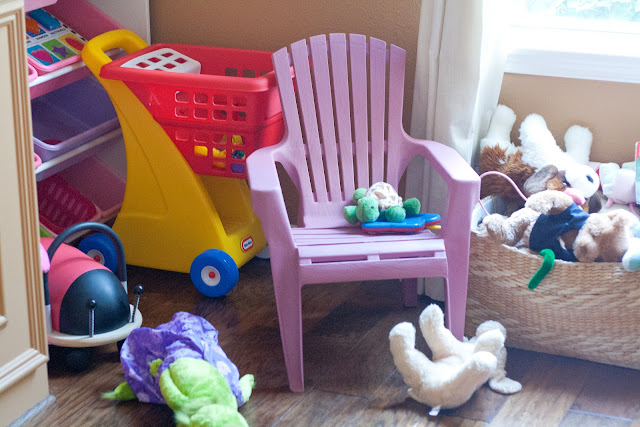 She had toys everywhere and only played with a handful.  Half the time she couldn't even get to all of her toys because the bigger toys were in the way or things just got buried or lost.  Not to mention that in about .2 seconds the house went from spotless to tornado. 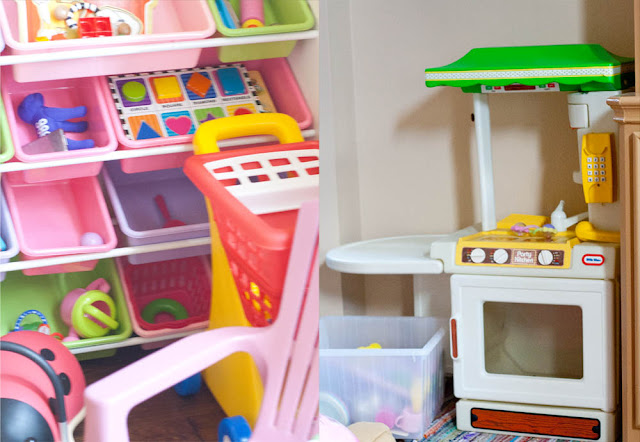 Not only was the entire front of the living room taken over by toys but there were bins of toys under the bench, her kitchen toys, and an overflowing toy basket in my room. 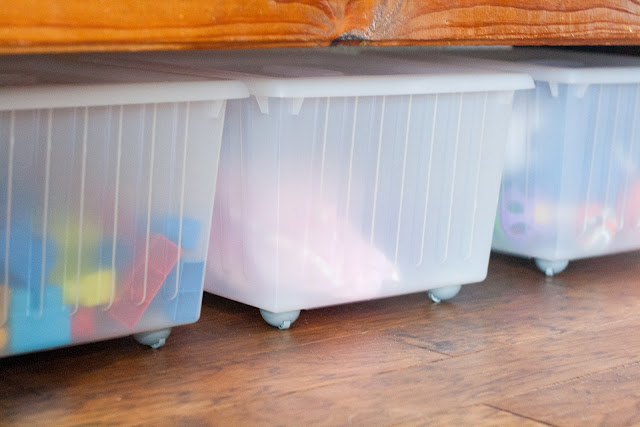 I started by sorting all of the toys into the basic categories: keep, donate, and to go to Austin's apartment.  A toy went to the donation pile if it was missing pieces, required batteries, if she had outgrown it, or if I found it excessively annoying.  Some toys that required batteries did stay if she really liked them, but I will probably donate them once the batteries run out if they are useless at that point...I don't want to do that battery change nonsense.  This is about simplifying after all.

Having so many toys put into boxes to donate or go to Austin's felt so refreshing!  I love that these toys will no longer be cluttering her play area and our living room! 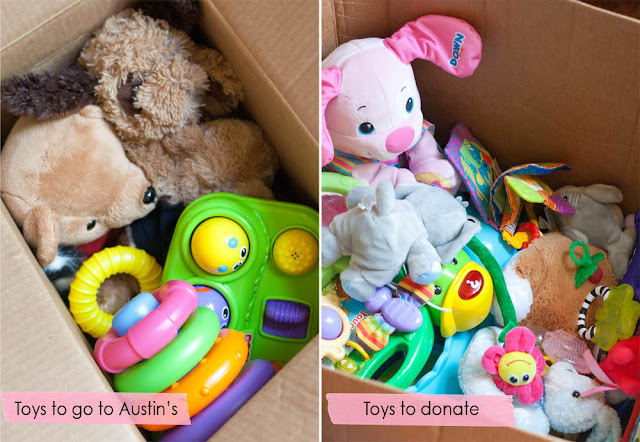 Then I dived her keep toys into different categories based on the type of toy it was so that I could guarantee that she had a good mix of toys in each of her rotation boxes.  These toys were separated into: 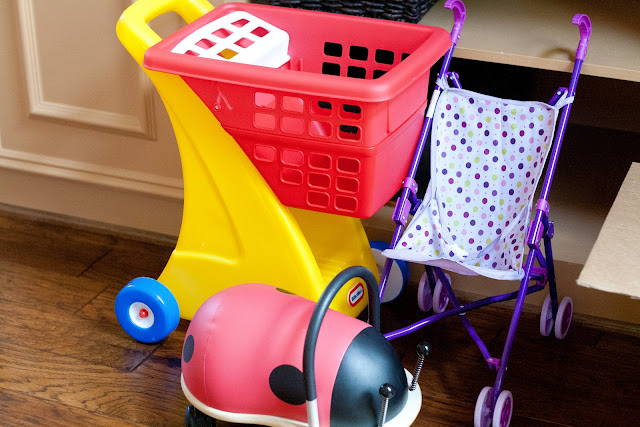 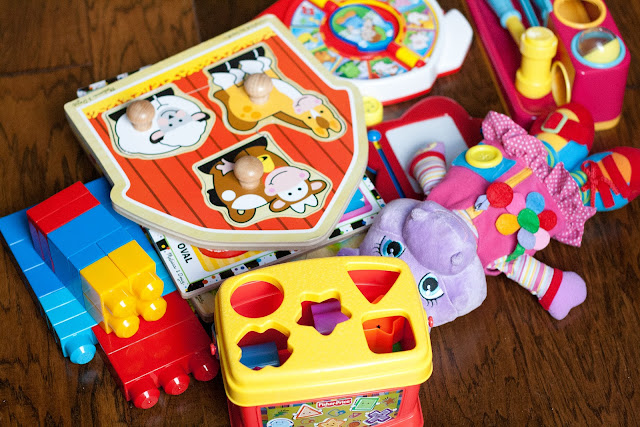 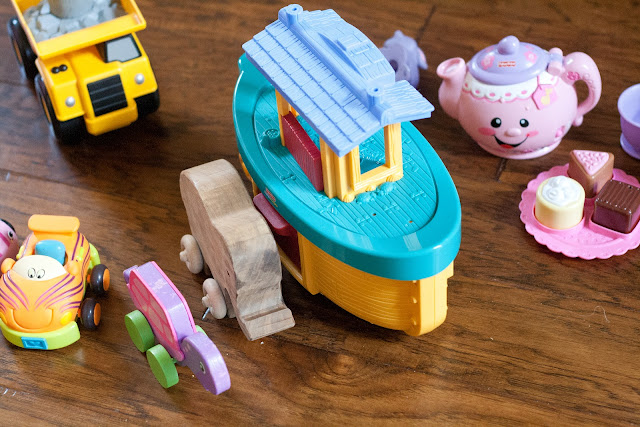 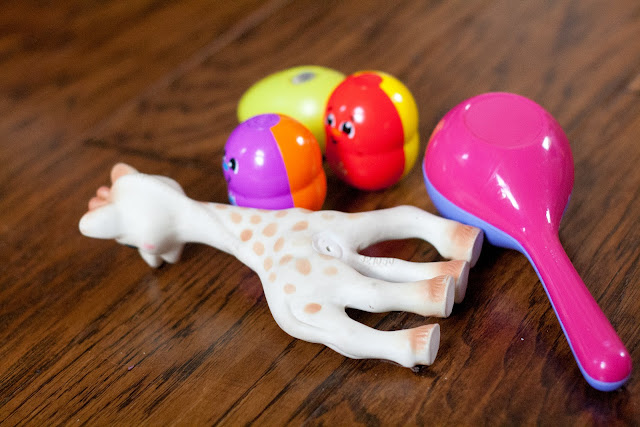 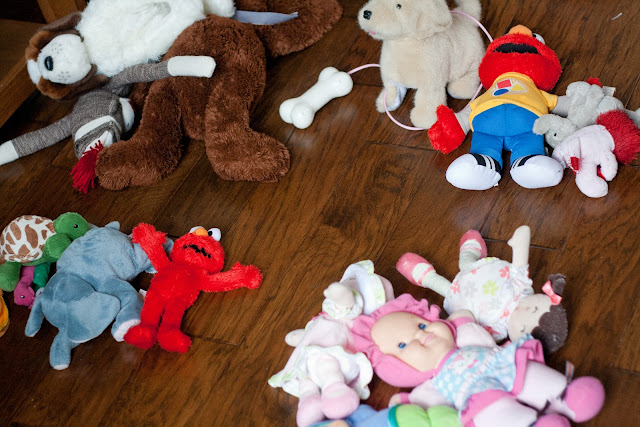 When I initially read about toy rotation, I was concerned about limiting her playing options.  However, once the toys were weeded and separated, I realized that being able to so many of the toys were being improperly or poorly underutilized.  I really do think that having access to fewer toys will allow her to focus on a toy and not jump from one to the next so rapidly.

However, being the free spirit that I can be, I had a hard time limiting some of her imaginative play items.  I guess I feel like when it comes to imagination, inspiration can strike at any time.  So I opted to keep a couple things out constantly.  I kept out her dress up items because she plays with them almost daily and I kept out her kitchen play items.  Her kitchen is in the living room at all times, so I felt like there should be something there to use with it.  I only left out her felt food and pots and pans.  Her tea set went into rotation and the rest of it went into a box along with extra legos to put away until she is older and we have more space. 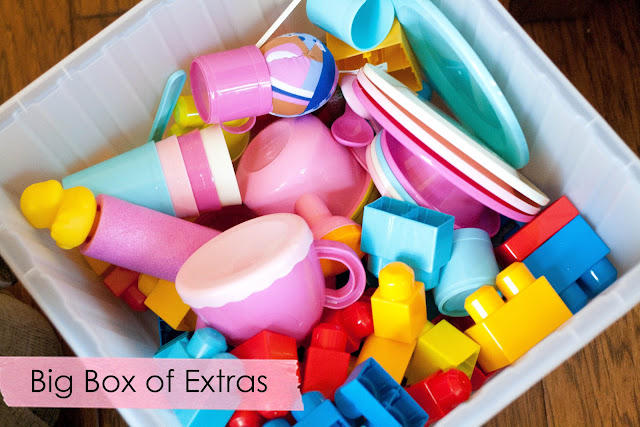 Then, part randomly and part strategically, I placed items from each category into three plastic bins to be used in the rotation.  Luckily I had bought bins already several months ago in attempt to organize her abundance of toys.  These were the boxes that were under then bench.  The two boxes out of rotation will go in the upstairs game room while they are not being used.

Her kitchen toys went into a pretty basket that had been freed up after the purge. 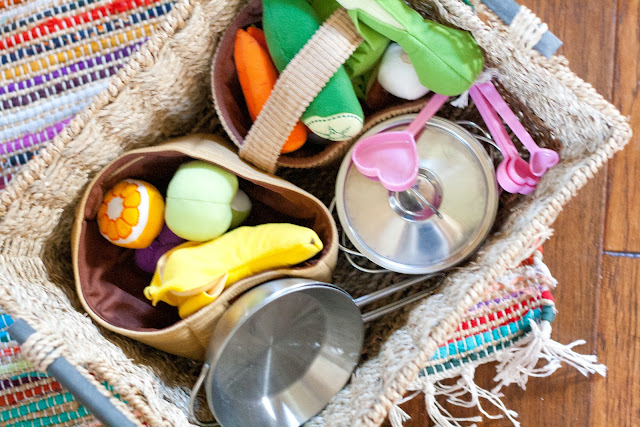 Her dress up items and the stuffed animals that are currently in rotation went into this previously overflowing basket.  I want to do something differently with these in the future, but they will work beautifully for now. 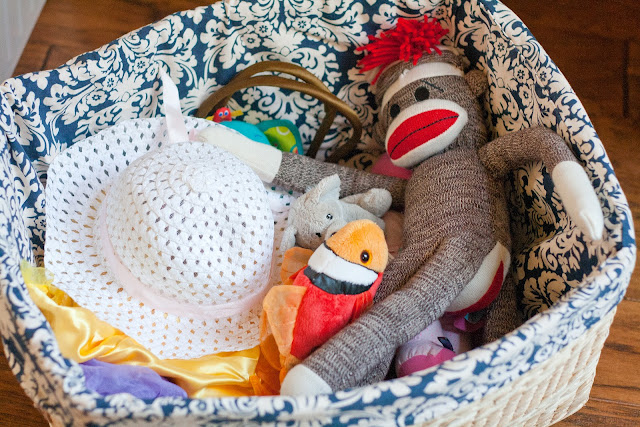 Now everything fits so nicely under the TV.  Easy to reach, easy to access, easy to clean, and much easier on the eyes.  The basket on the left is what her diapers have always been kept in, and the thing on the bottom left is the subwoofer, which unfortunately, does not fit into the cabinet. 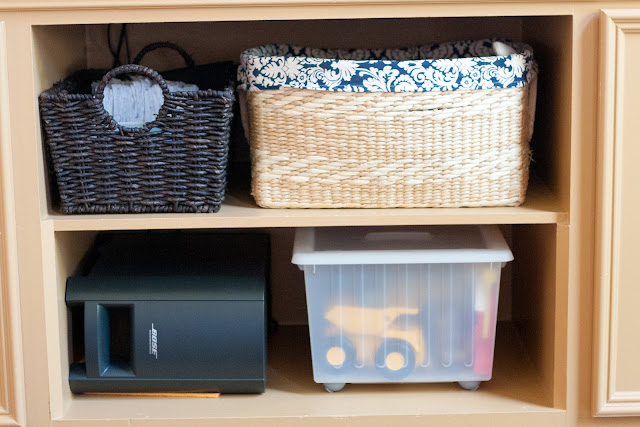 Her bigger toys I opted to keep out for now.  Partly because I don't want to haul them up and down the stairs, and partly because they all serve very different functions.  I am going to try not to use the pink bins for now.  I don't like them there and I have a plan for them.  If I don't use them all week, they'll be removed.  They're staying put for now because they are mounted to the wall. I have a climber after all. 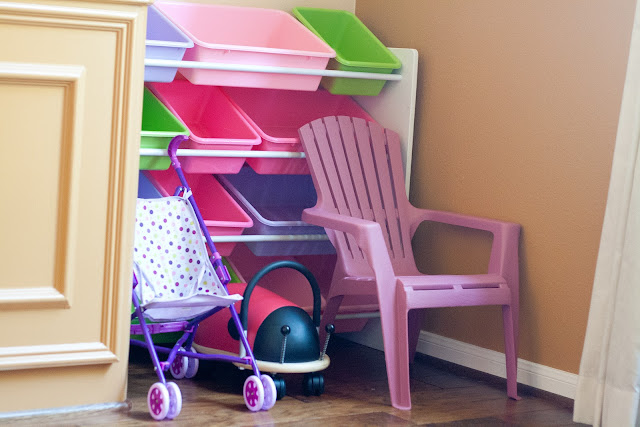 Her kitchen is still in it's original place because I often tell her to cook in her kitchen while I am cooking dinner and we can see each other from our "own stoves".  But it does look much better with a pretty and organized basket on it's counter than a giant white unorganized box protruding from underneath it.  Ideally, the basket would be smaller so that it fit into the door, that way I could put the counter down and put her chair in that corner...but this was the only basket that was available and I didn't have to buy a new one.  It works for now. 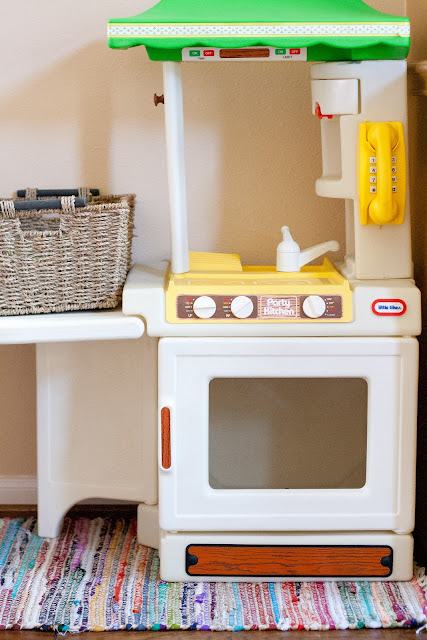 The only other thing in the living room that is out and open for her that I did not go through is her book basket.  Looks nice on the outside, but unfortunately, this has the same problem as the overflowing toy situtation.  Good books get buried at the bottom and are never read or they get strewn about the house.  I ran out of time, but I will be putting all of the books but ten upstairs and will switch them out whenever I decide they have been read enough or when the other toys get rotated. 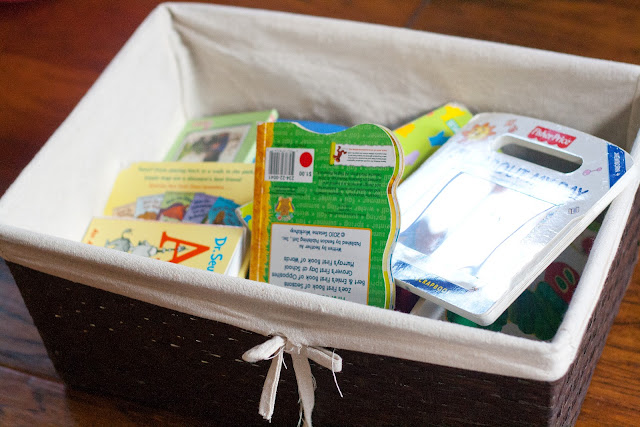 Already I have noticed Molly playing with toys that had been forgotten about and playing longer with one toy even though she has way less toys out in the open.  It is so much easier to clean up after she plays too and she has an easier time helping to clean which I am trying to encourage her to do.  Everything has a place now and it is simple to put away.

Even as I write this, while she is napping and the toys are put away, I have that feeling of peace and calm that I was searching for.  Before, even when the toys were picked up, they were just overflowing and were taking over the whole living room making it feel cluttered and making me feel anxious.  This is so much better.

Since she is now in Joy School five days a week and playing with toys there, I plan to rotate the toys only when I sense that she is getting bored with the current ones or maybe on a rainy weekend.  I feel like it's too much to keep up with to plan on and remember to do it every week or month.  Remember, I'm keeping it simple.  New toys when it feels right.

I am curious to see how this will work after a couple months.  The added benefit to separating all of the toys into categories is that I could easily see what she has enough of and what she could use more of and keep that in mind for Christmas.  Not to mention, that I have already cleaned out the old toys and have (kind of) made room for the new ones she will inevitably acquire at Christmas time.  After the holidays I will go through the old and new again and decide what can be donated and switch up the rotation boxes.


So, what do you think?  Do you think toy rotation would work for your family?  I would love to hear your thoughts on the matter in the comments!